To see large disasters that hit this country, my heart said a silent prayer. "Oh God, I hope my beloved Indonesia can last for a long time. How severe are the suffering of Indonesian people due to floods, landslides, Sinabung eruption that still continue since four months ago."

Beside the angry of nature, immoral human contribution to environmental damage is also not small. About 50 percent of Indonesia's environments have been getting worse over time. The country is powerless to repair the damages.

Obsession with the object is main trigger making the future of country as a bet. Who can solve it? The answer is people who free from immoral and irresponsible viruses.

I have heard that Manado environment in serious bad condition. Manado is known as a safe and peaceful city for all religions, their high tolerance, and good neighborliness, now hit by terrible flood.

People were screaming for help, but the help did not come on time. Transactional politics that is now being endemic throughout this beautiful country added the heavy burden that must be suffered by shoulders of this nation. Once again, "Oh God, I hope my beloved Indonesia can last for a long time."
More advanced age, the love for Indonesia that was broken by its children increasingly perceived. However, there is no much here we can do except speak out. Though we speak out, there are not much ears listening. 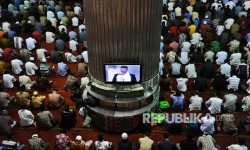